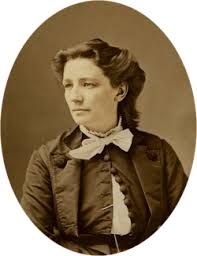 Victoria Claflin Woodhull was born September 23, 1838 in Homer, Ohio. She was an activist for women’s rights and labor reforms and was also an advocate of “free love”, by which she meant the freedom to marry, divorce and bear children without social restriction or government interference.

In the early 1800s women were not able to marry without permission from their father or eldest male relative. Moreover, once women married they had no right to sign a contract or own property. All property ownership was signed over to the husband upon marriage. This was true even if the property was in the woman’s family for generations. Women were also not allowed to keep their own wages, by law, they were required to surrender wages to their husband or father’s household. This changed with the adoption of the Married Women’s Property Act of 1848.

In 1872, Victoria ran for President of the United States from the Equal Rights Party, supporting women’s suffrage and equal rights; her running mate was abolitionist leader Frederick Douglass.

She was arrested by US Federal Marshalls on obscenity charges a few days before the election. Her newspaper, Woodhull and Claflin’s Weekly had published an account of the alleged adulterous affair between the prominent minister Henry Ward Beecher and Elizabeth Tilton which had rather more detail than was considered proper at the time. However, it all added to the sensational coverage of her candidacy. She was called “Mrs. Satan” after a caricature by Thomas Nast appeared in newspapers around the country vilifying her positions on equal rights and “free love.”

Even though she was the first woman candidate for president, it was illegal for Victoria to cast a vote for herself (or anyone for that matter) in the election. Though she ran she could not vote!

Unwilling to be bound to a double standard imposed by men, Victoria committed her voice and actions to reform. “They cannot roll back the rising tide of reform,” she often said. “The world moves.”

If you wish to read more –