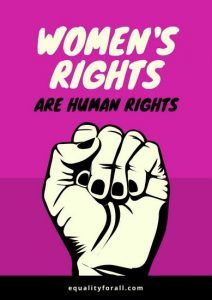 The women’s suffrage movement was only one element of our journey toward equality and equity. This journey, known as the Women’s Movement, was just getting started when it suddenly began to falter.

With the 1929 market crash and the onset of the Great Depression, the 1930s were quite different for women. Those who were concerned with feminist issues were further divided on how to concentrate their efforts. Many believed that garnering the right to vote was all the legislative support they needed.  They turned from lobbying for women’s rights to promote other reform efforts.  This includes promoting the peace and welfare improvement movements. Some demanded protective work legislation, while others remained adamant in pushing for equal treatment in the job market. Still, others were swayed by the not-so-subtle prodding of government forces to forget the issue of feminist rights until economic hardship had ended. Gone were the “new women” of the ’20s: the ’30s women floundered in a decade devoid of significant gains in the struggle for sexual equality.

The League of Women Voters exemplified the notion that the fight for women’s rights ended with the passage of the 19th Amendment. In 1931, the league’s president even claimed that “nearly all discriminations have been removed.” However, others noted that women failed to vote in a bloc, and that many failed to even consider women’s issues when casting their ballots. Many issues concerning women or issues promoted by women reformers simply failed from lack of support. Ironically, the 1930s began with the tenth anniversary of woman’s suffrage, but any attention to the matter revealed that in those ten years, women had little effect on the political world.

Josephine McGowan writes in a publication of the Commonweal (February 11, 1931):

The 19th Amendment has wrought no miracle in politics. It has neither brought about dire consequences foretold by the anti-suffragist nor yet produced the millennium of which the pioneers dreamed.

McGowan noted that while women gained the right to vote, many were indifferent to their new privilege and remained uninformed on current issues. Politics was still considered a man’s concern, and most women did not have the motivation to challenge this view.

The 30s was a decade of distraction. Women found so many issues that needed attention – education, children, poverty, healthcare, and peace that they failed to notice their own equality and equity was being moved in to the background.

I think there is a valuable lesson for women today from the women of the 30s. As we have faced obstacles in recent days and years we must not be distracted. There are and always will be important human and social issues to rally around. But women must be able to rally around these while maintaining a solid focus on the Women’s Movement and ever journey forward! After all, Women’s Rights ARE Human Rights!