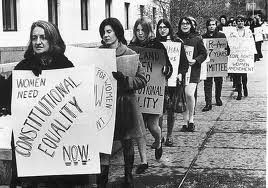 Just as the abolitionist movement made nineteenth-century women more aware of their lack of power and encouraged them to form the first women’s rights movement–sometimes called first-wave feminism–the protest movements of the 1960s inspired many women to create their own organized movement for greater rights–known as second-wave feminism. With the Second Wave, women were looking through a social-justice lens that was made clear through the efforts around Civil Rights. It is important to look at the societal climate for women in the 60s to realize the “battle” that took place so here are a few timeline bits for reference:

This is remnant to the Marital Chastisement common law and demonstrates continued minimization of violence from men toward their wives.

In 1963, writer and feminist Betty Friedan published The Feminine Mystique, a nonfiction book in which she contested the post-World War II belief that it was women’s destiny to marry and bear children. Friedan’s book was a best-seller and began to raise the consciousness of many women who agreed that homemaking in the suburbs sapped them of their individualism and left them unsatisfied.

In 1965, The US Supreme Court determines that married couples are legally allowed to use contraception.

The fact that the highest court in our nation had to rule on such a private health and family issue should be an amazement to everyone. The historical context that is essential is the fact that women, prior to this time, were subject to their husband for permission for health care of any kind. This was a part of coverture – women being “covered by man” through marriage. Married women had no rights to their bodies. That meant that not only would a husband have a claim to any wages generated by his wife’s labor or to the fruits of her body (her children), but he also had an absolute right to sexual access. Within marriage, a wife’s consent was implied, so under the law, all sex-related activity, including rape, was legitimate. Of course, a man wasn’t allowed to beat his wife to death, but he could beat her.

In 1966, beating as cruel and inhumane treatment becomes grounds for divorce in New York, but the plaintiff (woman) must establish that a “sufficient” number of beatings have taken place.

In 1966, the National Organization for Women (NOW), formed and proceeded to set an agenda for the feminist movement. Framed by a statement of purpose written by Friedan, the agenda began by proclaiming NOW’s goal to make possible women’s participation in all aspects of American life and to gain for them all the rights enjoyed by men. Among the specific goals set was the passage of the Equal Rights Amendment (ERA), a proposed Constitutional Amendment guaranteeing equal rights for women. First introduced in Congress in 1923, written by Alice Paul who stated, “Men and women shall have equal rights throughout the United States and every place subject to its jurisdiction. Congress shall have power to enforce this article by appropriate legislation.” 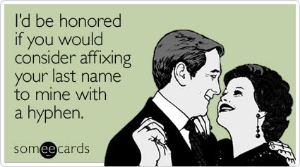 The ERA was finally passed in 1972 but failed to receive the 38 state ratifications necessary to become part of the Constitution. It has yet to be adopted today.

Women today must be reminded what we overcame and the context that caused the Women’s Movement to be necessary. Misogyny, Sexism, and Chauvinism are alive and breathing in our society. They are not yet “relics” of the past.  Therefore we must understand where we have come from in order to defend where we stand today and to garner the energy and passion to keep moving forward!