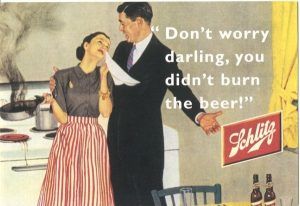 Though the 1950s was in many ways a period of conformity with traditional gender roles, it was also a decade of change, when discontent with the status quo was emerging. Popular culture and the mass media reinforced messages about traditional gender roles, consumer culture, and the Cold War ideal of domesticity, but the reality of women’s lives did not always reflect these ideals.

Soon after the end of World War II, men returned home and assumed their pre-war occupations. Millions of women who had joined the workforce during the war were being displaced by returning soldiers. Messages in popular culture and the mass media encouraged women to give up their jobs and return quietly to domestic life.

As women were forced out of the workforce, many women felt disenfranchised. Not only were women being discouraged from working at all, but the manufacturing and trade positions that were open to women during the war became closed entirely or paid a fraction of the wage paid to men performing the same job duties.

In 1959, Robert Smuts published, Women and Working America, which drew attention to the fact that women’s occupations outside the home between 1890 and 1950 had not significantly changed. The strides made during the 1940s for employment equity for women had suddenly come to a halt during the 50s. Furthermore, the 1950s are often identified as the pinnacle of gender inequality as women were denigrated and portrayed by advertising and media as less intelligent, purely domestic, and directly objectified.

Check out this YouTube video about sexism in advertising in the 1950s by S. Reilley: https://www.youtube.com/watch?v=Nw-loDyActY

One advertisement suggests that having polished and pretty nails is more important for a Secretary than being good at their job.

As feminists today, we continue to fight the misogyny and sexism in advertising that trended in the 1950s. Now, more than ever, we must stand together and be heard above the media messaging!

For more reading go to: https://digitalcommons.iwu.edu/cgi/viewcontent.cgi?article=1054&context=constructing